News From Beijing – Cooperation Between AASP and BNU 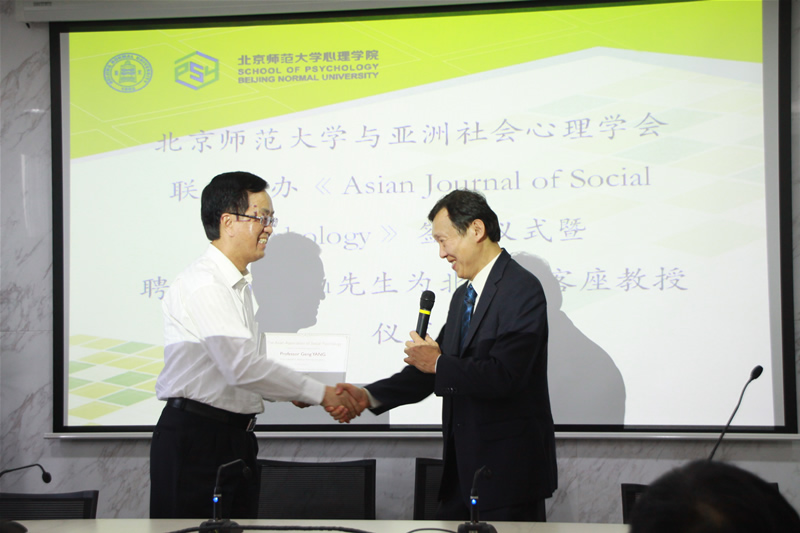 The ceremony was attended by Prof. James H. Liu, President of AASP, Prof. Geng Yang, vice-principal of BNU, Prof. Jia Liu, Dean of the BNU Psychology School, Prof. Li Liu and Prof. Zhihong Qiao, Associate Dean of the BNU Psychology School, and many teaching fellows and students of BNU. In the ceremony, Prof. Geng Yang was honored as a Senior Editor of AJSP, to help in strategic decision-making involving the two organizations in the future. Also, Prof. James H. Liu was honored to become Honorary Guest Professor by BNU.

BNU is among the top universities in China, in which the School of Psychology is one of China’s top-ranked institutions in the field of psychology. In recent years, BNU has growing interest in publishing in international journals and establishing international impact. As the premier international institution of psychology in Asia, AASP has earned its name in promoting research and applications of social psychology in Asian-Pacific region. Thus, the cooperation with AASP is “one of the most important moves of BNU’s internationalization”, according to Prof. Geng Yang. With this agreement, BNU as well as Chinese scholars wish to participate more actively in regional and international academic exchange and cooperation. Yang also said, “BNU would provide full support for AJSP. We are looking forward to further improving the impact of AJSP through close cooperation.”